“Well,” said Pooh, “what I like best,” and then he had to stop and think. Because although eating honey was a very good thing to do, there was a moment just before you began to eat it which was better than when you were, but he didn’t know what it was called.
― A.A. Milne, Winnie-the-Pooh

Re-directed by our expert man on the ground who kept the possibilities of our escape from a winter snow storm in Ireland open, we took off at last from Dublin, the second last plane to do so for three days. It was to New York, a quick stop (where we lost Spencer), Atlanta for a day (where we found Spencer) then down to Belize city and onto the ‘Rising Tide’ for six days. A MOTHER ship far from the reach of technology. Disconnected, thousands of miles from home and here we were buying Cuban cigars and Belikin Beer in a local supermarket before we boarded, like our lives depended on it, which they did!

We ran out to the reef far from MMOOTHHHEEERRRR and another skiff came into view, we stopped, a thousand yards between us a stick man at each end.

I tried to understand Noel the guides’ words.

Suddenly he said ‘Do you see de fish Jim?’ and straight away I did and it was happening faster than I could think which was good. Noel didn’t even have the pole out. Everett my companion and Noel the guide both spoke over each other ‘see de black tail, ad one o clock?’ merged with ‘fuck thats a big fish’ and I saw a tailing Permit at 80 feet eating crabs in the shallow breaking waves of the barrier reef.

The saltwater fish of legend.

The black scimitar tail waved at me in the wind and I made the cast. It didn’t need to be a far cast, the guide positioned the boat, what wind there was, was to my left, it was even slightly downwind! I could see beads of water drop from the fishes black tail. As I came forward on my cast I suddenly found my crab fly buried in the bend of my elbow. Leader wrapped around my neck, line around my legs. I stopped to breathe, to look!

Behind me in the boat the guide was having a little frenzy.

Everett sat and sighed and told me of the Permit he had caught and how I had ‘fluffed my first opportunity’ (read ‘Shot my load‘ from the Alabamian) like a novice buck five minutes into a Texan whorehouse.

Meanwhile the fish waved at us again from the reef, and then again.

Having traveled a huge distance in time (nine months of serious research and preparation) and thousands of miles to be here, I realised I was better than this. The time and place was now the anticipation was over. This was better, this was one of those moments few and far between that may never happen again, they had happened before of course and I had made it then, to other fish equally as prized. And I picked the fly from my shirt and held it and made a few quick short stop and starts to get a loop on the water and some tension and loaded it and picked it up and dropped the fly and then cast the fly backwards in a super cool light tight blue loop of line and turned it over and put it on his nose at 75 feet.

Noel shouted ‘Strip strip strip’ all the previous shit forgotten when he voiced ‘Jesus datza grate kast’ which lulled me into both a false sense of fly-fishing superiority and confidence.

The fish did and didn’t do three things – he didn’t spook and he didn’t eat and then he disappeared.

All the last few years of normal life and its difficulties, the last few days of the heightened and the continued building anticipation, the concerns I had for the next week of fishing so far from home were forgotten and I remained at the bow watching the waves break in a crooked white line for miles over and across the incredible blue green reef and thought that this is what mattered now, this is where I am and I considered what I needed to do. I made sure the head was out, the line was water loaded, I held the leader a few inches from the fly. Ready.

I saw the tail and I cast backwards again and the fly went right on him and I stripped and I stopped and I cast again and made a mess of a few and Noel said ‘dat man, woz a biggg fish’ and he couldn’t believe that after six good presentations and as many poor ones that the fish wouldn’t eat or spook and then I saw a Barracuda to the left and a Trigger to the right and they all wanted the fly and none of them could get there quick enough and then they were all gone, in a blink, into the waves…….including the first Permit I had ever cast to.

I came back to the middle of the baot and sat beside Everett and he said I had done well, and I suddenly remembered taking his advice as he shouted at me in the midst of it all from behind, reminding me to

We opened three bottles of ice cold Belikin after that and we clinked them and I felt the slickness of the cool green glass and once more looked at the endless miles of fly fishing opportunities – it was 10:20 am, Sunday, day one and from far away I heard Noel say ‘tailin fish’ and Everett gets up and hands me his beer, sighs like he’s bored, he shallow yawns, nervous and excited, muttering something about too many cameras. He stumbles a bit to the platform his anticipation over……… 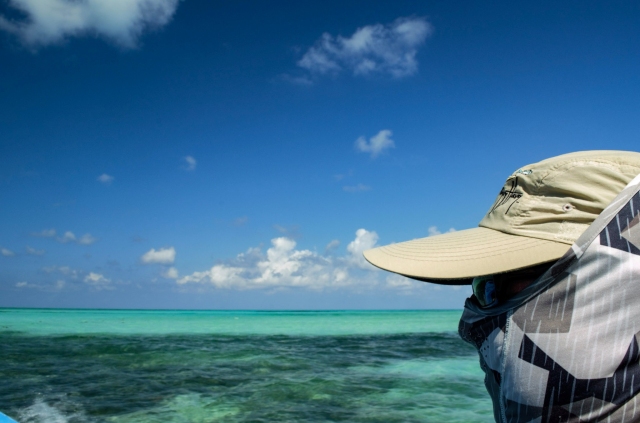